Greenpeace, WWF Hellas, the European federation of citizen energy cooperatives (REScoop.eu) and the social cooperative company Electra Energy are sounding the alarm for the future of the Energy Communities in Greece if the institutional framework is not changed immediately.

Energy Communities are exclusive urban cooperatives, through which primarily citizens (either as individuals or as legal entities) can operate in the energy sector, utilizing clean energy sources.

Given that it is practically impossible for energy communities to compete on an equal footing with private investors in the markets, the regulation virtually eliminates any incentive for citizens and local authorities to set them up in the new year. Equally important, it opposes the European institutional framework which identifies the specific characteristics of energy communities, recognizes their social and developmental benefits and demands the protection of the inalienable right of citizens to participate in energy markets.

The most important problems faced by the development of energy communities in our country are presented in a report of the four organizations. These are mainly found in the lack of funding, in unnecessary bureaucratic procedures and in the lack of institutional framework, the report points out.

However, the most pressing issue is the mandatory participation of all energy communities without exception in tenders from 1 January 2022 to ensure operational support for renewable energy projects.

This amendment came as a response of the Ministry to the phenomenon observed in the market in the last two years, precisely because of the above problems: most energy communities registered in GEMI (General commercial register) are not genuine initiatives of citizens and local communities but covert private initiatives, in order to avoid the tenders. However, instead of simple and clear criteria to separate the authentic energy communities from selfish initiatives of private investors, the Ministry decided to include all without exception in tenders.

In a given problem in the energy market, the political leadership operated with the logic “if the hand hurts, we cut the head”. The government must defend the right of citizens to energy democracy and not vindicate those who want the energy market to be an oligopoly for just a few players. “If the ministry believes even one word of what it says positively about energy communities in its own National Plan for Energy and Climate, it should immediately withdraw this provision”, said Takis Grigoriou, responsible for energy and climate issues at Greek Office of Greenpeace.

“We are afraid that this development will weaken the authentic ventures that already exist, will discourage new initiatives from local communities and will suspend the strengthening of energy democracy in our country,” said Dimitris Kitsikopoulos on behalf of Electra Energy.

“Greece, like any Member State, has an obligation to incorporate the European Directives into its national legislation in a timely manner and to ensure that the energy communities receive sufficient support so that they can participate in the energy market on an equal footing with its other actors, without discrimination”, commented Dirk Vansintjan, President of REScoop.eu.

A second major problem identified in the report is the complete impossibility of setting up small schemes of collective clean energy production by households, mainly due to the increased operating costs from the mandatory start of work in the tax office. It is recalled that the goal of the National Plan for Energy and Climate is at least 600 MW of new self-generating schemes by 2030, which in the current conditions is practically impossible.

The organizations come up with a series of proposals, the most urgent of which are:

– Immediate implementation of the assessment of the barriers and development opportunities of the energy communities provided for in Article 22-3 of the RES Directive, with the substantial participation of all interested and directly involved bodies.

– Design of a complete and functional exclusive model of collective self-production and virtual netting, suitable for small groups, whose members are not considered tradesmen and are exempted from the obligation to start work in the tax office, as is the case today with ordinary self-producers or in the past with the program “Solar energy on the Roofs”. The introduction of the new model should be accompanied by a long-term strategic plan and provide appropriate financial tools, as well as support structures and actions.

– Accelerate the implementation of the goals, measures and commitments of the ESEC (National Plan for Energy and Climate) concerning the Energy Communities. 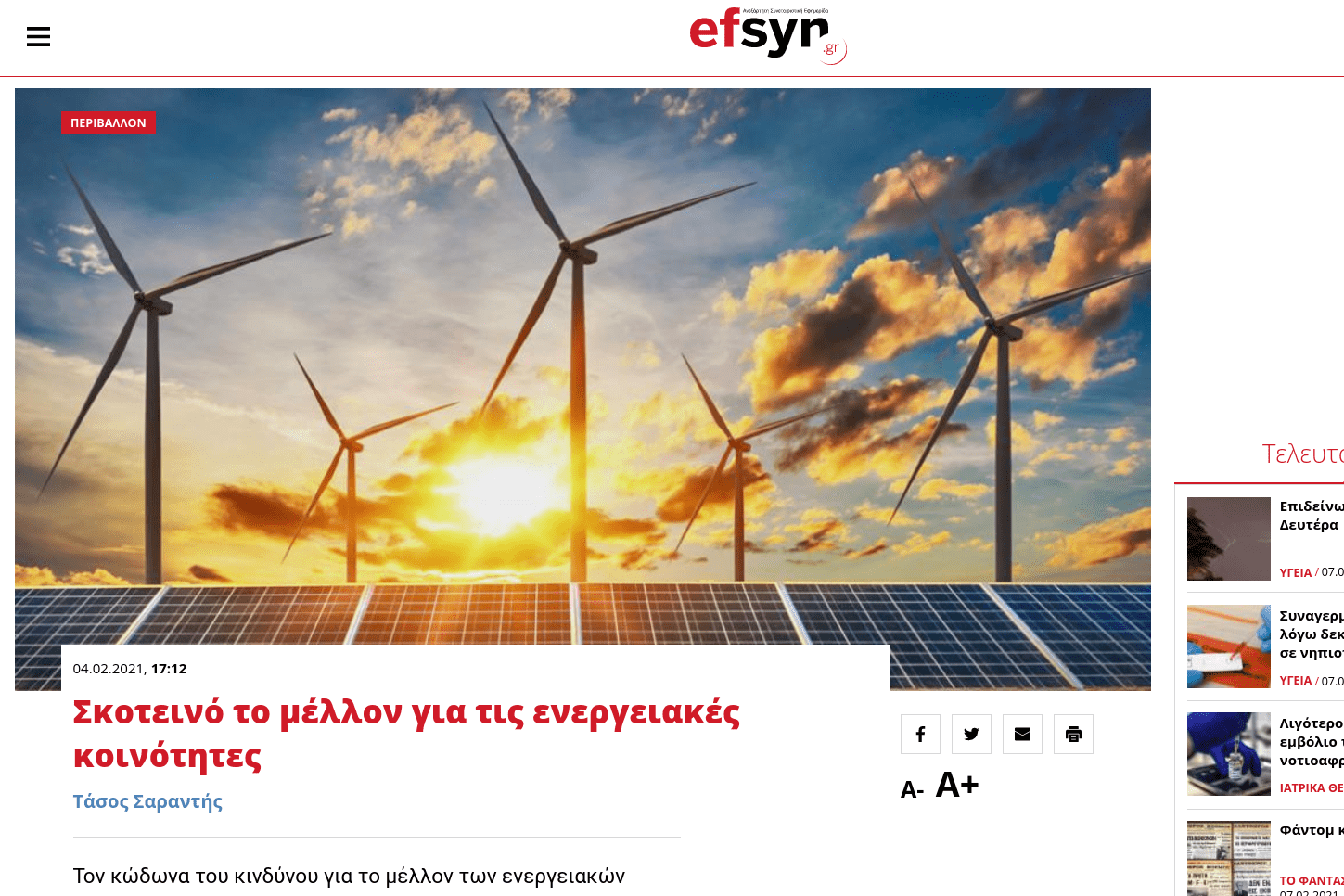