First step in creation Energy Community has been taken

Since 2015, the Municipality has started to deal with the energy landscape of Kythira and Antikythira in an effort to save energy both for cost reasons and as a contribution to the effort of the country for the energy transition. Key elements of the action so far are the improvement of the energy efficiency of installations (mainly lighting) with newer technology and energy interventions of buildings when the opportunity was given.

Recently, the Municipal Council created an Inter-Parliamentary Study Committee representing the three municipal factions (Charalambos Sougiannis – Deputy Mayor / Coordinator-, Nikolaos Magoulas, Georgios Didimiotis), the KIPA (Ioannis Travisaros), EEPKA (Dimitris Panaretos) and two private specialists (Manos Vasilakis and Spyros Michalakakis), which after investigating the current institutional and legal framework for RES unanimously came up with a proposal to create an Energy Community. This EC in the first phase will have as key members the Municipality of Kythera and its related services/activities, with a view to expanding this activity in the near future also beyond the narrow municipal framework (to local businesses and citizens).

This proposal was approved unanimously by the Municipal Council and is the compass of our Municipality for energy issues. Proving in practice that there is another solution for the energy transition, such that will benefit our island and its residents / visitors. And it makes for another reason unacceptable any thoughts of installing dozens of industrial wind turbines in Kythira (an issue in which our Municipality has expressed and substantiated opposition and also deals legally).

The vision of the Municipality is to make Kythira and Antikythira, real “green” islands “, contributing to the effort of energy transition, in order to support the national goals and the economic development of our islands. We aim in the long run (2050) for almost 100% coverage of our energy needs by self-production through RES. And depending on the possibilities in the production of a reasonable surplus that will create resources for the Municipality in order to strengthen its actions and infrastructure.

Kythira in 2020 has an estimated total energy consumption of 52 GWh of which electricity is about 17-18 GWh. 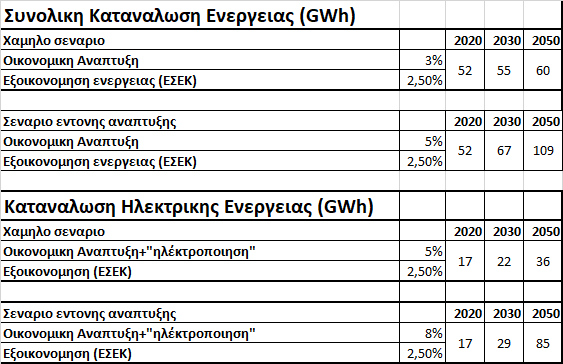 The estimate of the evolution of the projected consumption is shown in the Table in 2 scenarios (business as usual scenario and long-term growth scenario), including the effects of energy savings. It is largely based on the strong development of Kythira in recent years in the tourism sector, the expected effects of improving the infrastructure already underway, and the potential that Kythira has for its productive reconstruction (eg in the primary sector). In all cases, the production of cheap and easily accessible electricity is expected to increase local development.

The preliminary design of the Municipality (cross-checked with market executives, energy consultants, etc.) provides that it is possible for EnCoin (the Energy Community) to provide electricity at a cost of € 50-60 per MWh (and this is independent of the current and possible future dramatic increases in fossil fuels). The reported price is based on a typical installation subsidy scenario and further support will be sought from both the central government and the Region.

The Municipality is pleased to announce that it has assigned the next phase of the program (formulation of the Energy Community and the Business Plan) to a specialized energy consultant following the best practice of Encoins after market research and the unanimous motion of the Inter-Parliamentary Committee. The relevant fund of the first phase of € 12,400 is already committed and we expect it to be completed in the next 3 months. Licensing will follow and then the next phases (construction, connection, etc.).

We believe decisively that we have taken the first step in supporting the development of Kythira and making it a model in the energy transition and an environmental and human friendly island. An ideal place, worth living and with future progress.